Sharing the gospel is the most loving thing you can do for anyone. It is good news for everyone, regardless of their background or their attitude toward hearing it.

However, it can be helpful to consider those different backgrounds and attitudes when sharing the gospel with your neighbors or coworkers. When you understand where someone is coming from, you can better serve them by meeting them where they are. By asking people questions about what they believe and why they believe it, you can get them talking and thinking about the truth.

Here are some broad descriptions of the different types of people you are likely to come across, and how you can share the gospel with each of them.

People of Other Religions

Globally, most people identify with some religion, whether that be Islam, Hinduism, Judaism, Buddhism, or others. There are big differences in these religions, of course; they may worship different gods, or believe in no god at all. However, there is one thing that basically all other religions have in common: they all include an element of trying to do the right things to be “good enough” to either earn their god’s approval or achieve a heavenly state.

That’s what makes the gospel different from any of those religions: it is not about being “good enough.” In fact, the starting point for the gospel is recognizing that we are not and cannot be “good enough.” That’s because the standard of a perfect God is perfection (Matthew 5:48), and no one is perfect (Romans 3:23). The good news, the truth of the gospel, is that we don’t have to earn salvation; it is offered as a free gift (Romans 6:23) thanks to Christ paying the penalty on the cross.

So, when you are sharing the gospel with someone of a different religion, asking them about that religion can be a good place to start. Ask them, “What is the purpose or goal of your religion? How does one get there?” If their answer includes doing good works or somehow being “good enough,” ask them how they can be sure that they’ve done enough. Where is the dividing line, and why should that be the line? For example, if 90 percent perfect is “good enough” for salvation, why should someone at 89.9 percent be condemned? Explain to them how the gospel is different, and how they can be assured of salvation without being perfect.

In the U.S., you will likely find more self-proclaimed Christians who need to hear the gospel than people of other religions.

That’s because many people treat Christianity as a performance-based religion instead of a relationship with God. In other words, just like people who follow other religions, many Christians believe that they have to follow rules and do good works to be “good enough” for God. It’s also because, in many places, Christianity is part of the culture. People consider themselves Christian by default, just because they don’t follow one of the other religions. They are “Christian” without ever making a conscious decision to follow Christ.

Sharing the gospel with these “cultural Christians” is a lot like talking with people who follow another religion: you have to make it clear that Christianity is not about works, and that no one can be good enough on their own. Ask them, “If you were to die today, on a scale of 1-10, how likely are you to get into heaven?” and “If God asked you why He should let you into heaven, what would you say?” If they say they are less than a 10, or that they should be let into heaven because they are a good person or have done good works, then you know they are not trusting in Jesus and still need to hear the gospel.

Some people will honestly say that they don’t know what to believe. They are not sure whether God exists, or they are curious about which “religion” to follow. People who answer survey questions as “spiritual but not religious” can fit in this category, if they say they believe in a higher power but don’t want to commit to saying who that higher power is.

You can serve these people by sharing your story of how God has worked in your own life. If they are looking for evidence that God exists, your story of life change because of the gospel is part of that evidence. If you are in Dallas, you can also invite them to join you at Great Questions on Monday evenings, where they can ask any question about the faith and get clear answers.

Some undecided people are actively seeking answers and will love talking to you about God. However, others are comfortable being undecided because it means they don’t have to make a decision. They find it easier to ignore the subject. It is loving to remind these people that there is an answer to the God question, and that the answer will affect them for eternity. Encourage them to consider the implications of what is at stake and ultimately come to a decision.

For example, although atheists may say that they base their decision on science, science does not prove or disprove the existence of God. “Science” is just the study of how the world is. Theories about how the universe came to be are attempts to describe how God created the world; they cannot determine whether God created it or not. God leaves us free to choose whether to believe in Him.

As with anyone, just share what you believe with atheists. Point out that you are both relying on faith; neither of you can definitively prove or disprove the existence of God. Explain that you are sharing the gospel with them out of love for them (1 John 4:16-19)

In all of the above categories, people can react to the gospel either positively or negatively. Some will be curious to hear what you have to say, but some will want to shut their ears.

If someone is antagonistic towards hearing the gospel, a natural question would be, what are they upset about? What are they opposing? Maybe they (incorrectly) think you’re trying to get them to change their behavior or follow a list of rules in order to earn God’s approval. Maybe they’ve been hurt in the past by a Christian, or by someone who merely claimed to follow Christ. Maybe they just like to argue; for some people, debate is a sport.

When someone is antagonistic towards the gospel, remember that it’s not your responsibility to convince them. Only the Holy Spirit can open people’s eyes to the truth. You’re not going to argue someone into believing, and trying to do so can be counterproductive. Even Jesus’s Apostles were instructed to move on from people who didn’t want to listen to the message (Matthew 10:14). Just share the truth with people, pray for them, and love them the best you can.

Remember that the gospel is for everyone, and sharing the gospel is always a loving thing to do, regardless of how people respond.

To learn some tools you can use in sharing the gospel and other evangelism tips, check out the other articles in this series. 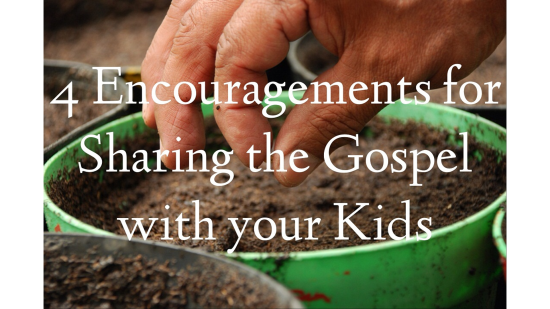 4 Encouragements for Sharing the Gospel with Your Kids

Feb 20, 2014 • 6 min
This has been a rich month in Watermark Kids as we’ve spent time talking with the kids about “righteousness”. Every godly character trait we study in our curriculum presents a unique opportunity for us to point to the gospel of Jesus, but some traits are...The post 4 Encouragements for Sharing the Gospel with Your Kids appeared first on Watermark Community Church Blog.