Jesus Teaches at the Temple 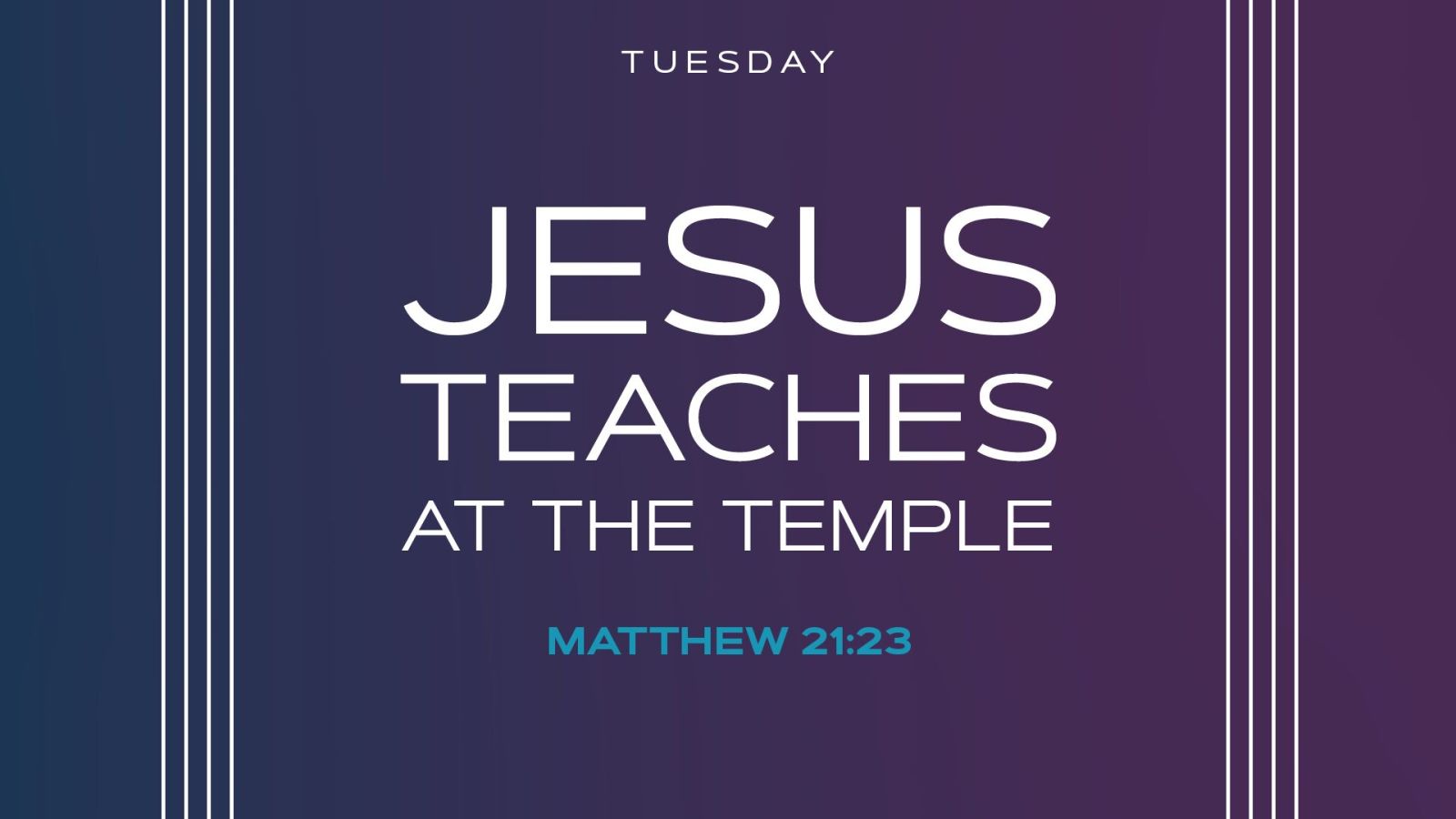 Yesterday, we saw Jesus cleansing the Temple. He did this because, more so than anyone else, Jesus understood the importance of coming to his Father authentically in worship and prayer. He so passionately believed this should be done without distraction that he flipped over tables and chased people out of the building. This is a side of Jesus we don’t see often, but a crucial part of his character all the same. He is zealous for his Father’s glory and deeply desires us to be in his presence. Think for a second about what Jesus would “drive out” in our own homes and hearts. What gets in the way of you experiencing God’s presence? Are social media, Netflix, television, or the news distracting you from prayer and worship?

Now, we’ve come to Tuesday of Holy Week, and while things are already quite intense, the story is certainly far from over. In the midst of everything that is going on, today’s chapters show us that Jesus still takes time to instruct and teach people truth. We can learn a profound lesson from this. Even during chaos or crisis, Jesus still wants people to come to him and listen. He wants to speak to our confusion and correct our misconceptions. Jesus always has something to say and he is saying it with authority. While it may not be what we want to hear, I promise you that it will be what we need to hear.

In these chapters, we see all of the various religious leaders, scribes, priests, elders, Pharisees, and Sadducees gather to hear what Jesus has to say. For three years, Jesus had been proclaiming a new way of living and that a new Kingdom had come. In many ways, his message contradicted and undermined the power of these religious leaders. And so, right from the beginning they question Jesus’ authority (Matthew 21:23, Mark 11:28, Luke 20:2). I picture a crowd of stuck-up people in fancy robes sitting on the outskirts smirking and scowling. These men are not there to genuinely listen. They want to trip him up. How often do I come to Jesus with the same posture? I want to be the one in charge. I want to be the one that is right. I want Jesus’ message to align with my own way of living. Thankfully, Jesus has so much more for us than this.

Jesus shares with his audience several parables and lessons. While these can seem disjointed at times, they are all pointing to the same truth: we, like these religious leaders, are often tempted to misunderstand Jesus. In these stories about wicked tenants and ungrateful wedding guests, these lessons about the resurrection and Great Commandments, and this condemnation of scribes and Pharisees, Jesus is trying to teach something true about himself. He does this even if the reaction is anger or frustration.

Everything Jesus taught in the temple somehow called out the religious leaders, or corrected people’s thinking. His message was powerful, bold, and beautiful. Jesus was the true heir that the unfaithful tenants (the religious elite) were rejecting (Matthew 21:38-46). They, in their pride, were the wedding guests that ignored the King’s invitation and killed his messengers (Matthew 22:5-6). Contrary to popular belief, Jesus wasn’t trying to overthrow Caesar, but instead insisted that people pay their taxes (Mark 12:17). The resurrection from the dead was both very real and confounded those that did not believe (Luke 20:34-40). We also see Jesus warnings and condemnation toward the hypocritical scribes and Pharisees (Matthew 23:1-36). He points out that they were simply trying to appear righteous. They did not truly understand their wickedness and did not truly care for or love others.

All of these lessons are hard to hear. So hard to hear that listeners left the Temple wanting Jesus dead. But before we join Jesus in his condemnation of the religious elite, we should look at our own hearts. Jesus is not just speaking to the scribes and elders here. He is also speaking to us. Jesus wants us to remember how often we forget who he truly is. We too “get Jesus wrong.” Our sin, no different than the sin of the Pharisees and Sadducees, also demands justice. We also forget about the resurrection, fail to love others like ourselves, and ignore the widow and orphan.

Thankfully, because of Jesus, we still have hope. He is the Son of God and the Savior of the world. He taught the truth so that we might come to faith in him. He died so that we might live. He rose again to promise us a future. Jesus is the perfect heir, the perfect wedding groom, and the perfect sacrifice. While the religious leaders of his age sought to put Jesus to death, we can instead follow in Christ’s footsteps. So, in this season, let us listen to Jesus’ teaching and remember just who he is. That way when Good Friday comes, we remember what comes next.

If you missed a day in the Holy Week series, read the previous entries here.