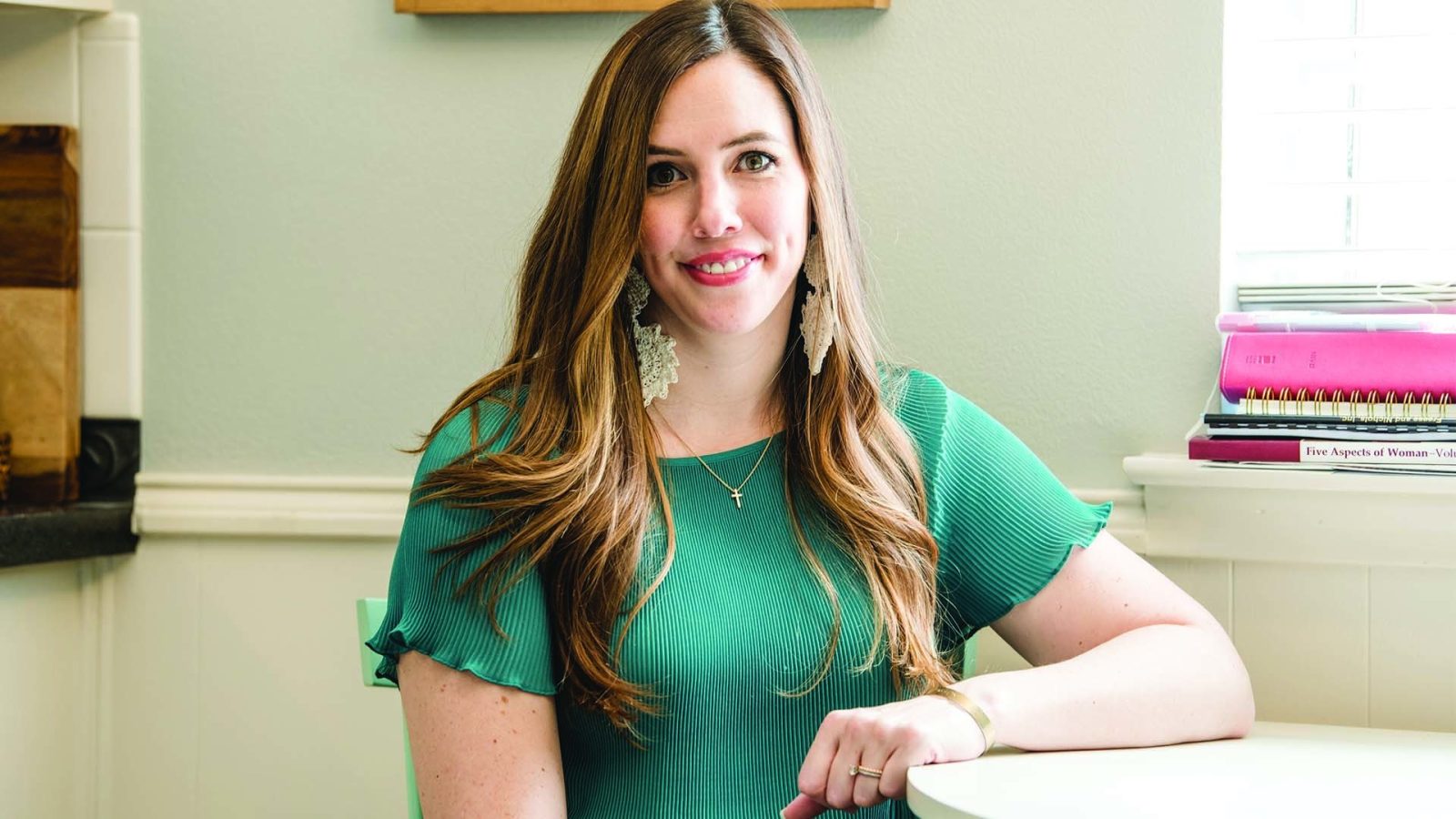 “Whether I’m struggling with fear or with the daily demands of serving my husband and children, I need Jesus, minute by minute. I talk to Him all day long.” – Natalie Carlson

“Although God was far from my mind, I look back at the lowest points in my life and see that the Lord protected me,” said Natalie Carlson. “I abused alcohol and engaged in self-harm and inappropriate relationships. I should have ended up dead, but in God’s mercy, I was spared from many of the consequences of my actions. God had a plan for my life, even though I turned from Him.

“When I was younger, I was in church but not in relationship with the Lord. I responded to altar call after altar call because I knew something was missing in my life. At home, yelling and arguments stand out in my memory prior to my parents’ divorce. Later my mom remarried and that only made things more uncomfortable. “I was scared of everything, from kidnappings and break-ins to our car breaking down on the side of the road or a plane crashing into our home. As I got to junior high, my anxiety became so overwhelming I had panic attacks that drove me to quit the dance team. In high school, I stopped attending church and did not acknowledge Christ for many years. That’s when I went off the rails, looking for my identity in friendships, relationships with guys, and alcohol abuse.

“By the time I was in my 20s, I was spiraling out of control and looking for any way I could find to numb my pain. Alcohol and partying were an almost daily part of life. I was on anxiety medication and would regularly drink until I blacked out. Self-harm and cutting were also beginning to be a regular practice.

“My rock bottom came when I walked in on my boyfriend to find that he had cheated on me. I went to my car and cut myself. To my shame and embarrassment, someone thought I was trying to commit suicide, and I was sent to the hospital.

“I moved away from Austin after that, living with my father and later with a new boyfriend. He was a professing atheist, which didn’t sit right with me, although I didn’t know what I believed about God. I viewed many religious people as hypocritical and felt the church was selling a pack of lies. But after that relationship ended, I went searching for truth. I studied world religion, attended the Unitarian church, and even explored Buddhism.

“Later, I met my husband, Cullen. Although I wasn’t following the Lord, I had a real desire for a church wedding when we got engaged. That’s what brought us to Watermark. Every time I walked in the door, the worship washed over me, and I was so glad to hear God’s Word presented in a way that penetrated my soul.

“Cullen and I were living together while we were engaged, and as I began to walk with the Lord, I knew it had to stop. Choosing to quit living together before marriage was an act of obedience to God. I knew I could not ignore the Lord’s call to change, because if I wasn’t willing to be obedient with our living situation, with what other things might I be disobedient? So, I moved in with a family friend who had an extra bedroom.

“Although it felt like a sacrifice of my comfort and independence, I look back on that time as such a blessing. I spent time in God’s Word in a way I had not ever done before, and God changed my heart. I had always been a very career-oriented person with little interest in home and children. God gave me a desire to be a wife and a mother. I started to experience a constant abiding with the Lord and was in awe of everything Jesus was doing in both of our lives.

“Over the years, God has been faithful to work in my heart and show me what I should do to submit to His Word, faithfully follow Him, and serve my family. The most beautiful thing about that has been that God did not rip off the bandage and expose all my brokenness at once. For example, anxiety has continued to be a struggle in my life, and God consistently has proven that He is bigger than my fear. The Lord has provided a community of people to help and encourage me when I am anxious. Because of Christ, I am able to face things that used to drive me to unhealthy behavior. Whether I’m struggling with fear or with the daily demands of serving my husband and children, I need Jesus, minute by minute. I talk to Him all day long.

“Cullen and I have been married for five years and have two children, Caleb and Isabelle. When I look back, I’m amazed at all God has done. I was an anxious, hurting girl who didn’t trust God or think that any marriage would last because of the unhealthy examples I saw around me. But today I can live in confidence, not because I’m ‘good enough’ but because of God’s faithfulness. Our marriage is not perfect, but we have a godly, healthy marriage that is only possible through Christ. By God’s grace we now serve with Watermark’s Merge ministry and try to encourage couples who are deciding if marriage is the next right step in their relationship.”