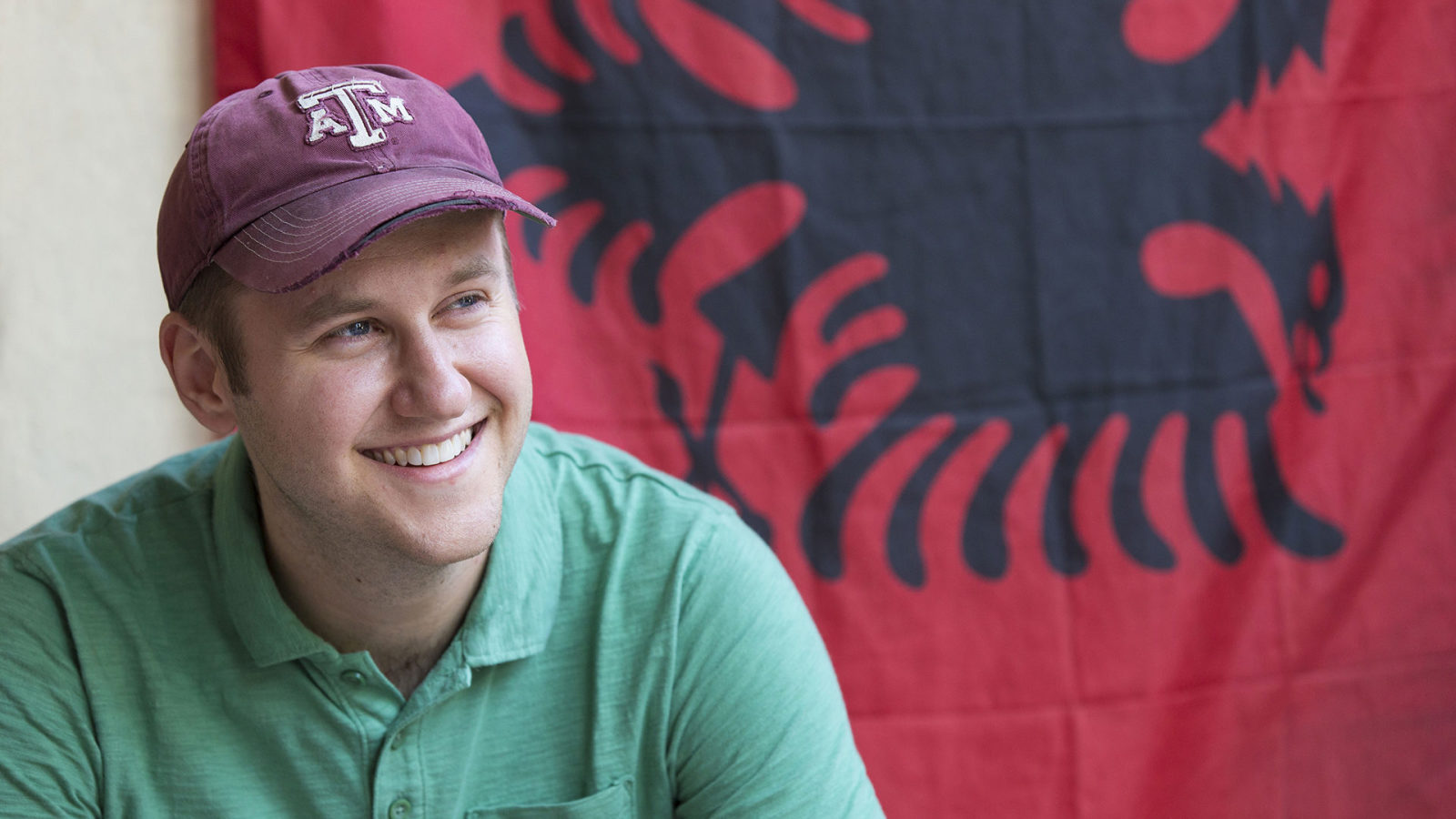 “The kingdom of heaven is like a treasure hidden in the field, which a man found and hid again; and from joy over it he goes and sells all that he has and buys that field. Again, the kingdom of heaven is like a merchant seeking fine pearls, and upon finding one pearl of great value, he went and sold all that he had and bought it.” (Matthew13:44-45)

“What I’ve realized is that being obedient and going to Albania was about making the deliberate choice to pursue God first instead of what I think is best for me. In the end, pursuing God first is what was best for me.” – Gordon Burgett

“I had a choice to make: Did I want to live comfortably or did I want to grow in my faith? Things have not been comfortable; I’ve experienced many challenging things,” said Gordon Burgett.

After graduating from Texas A&M University with a degree in Electrical Engineering, Gordon spent a year trying to start a business related to RFID chips. When that failed, he found a job in software engineering and worked for a software company. It was a great job with a good work environment and a nice salary.

Gordon also volunteered with The Porch (Watermark’s Young Adult ministry). It was there that he and his friend, Will Noll, first learned about a discipleship group whose goal was to first study the Bible and then serve together on a discipleship trip in Albania. Gordon joined the group and went to serve with them in Albania through Cru (formally Campus Crusade for Christ). Because of the success of the trip, Gordon and Will reached out to others at The Porch to get them involved. Gordon returned to Albania with 10 others in 2014. Then, in 2015, he decided to quit his job and move to Albania to take part in a STINT (Short Term INTernational yearlong mission trip). He is currently about to start his second year living there.

“For me it was never about having some kind of feeling about whether I should go or not. The opportunity was there, and I decided I wanted to do it. I think people overuse the word ‘called.’ It was really an act of obedience. Initially I started thinking about it just as a fun thing to do with a year of my life. There’s really no better time to do it than now, since I’m unmarried and have no debt or anything tying me down. I would say to anyone considering international missions that you really ought to pay off any outstanding debt first. It makes things a lot easier.

“I like to say that my ‘mistake’ was listening to a sermon that got me looking at the resurrection differently. I read Paul’s statement in 1 Corinthians 15, ‘If in Christ we have hope in this life only, we are of all people most to be pitied.’ I asked myself the question: what in my life is pitiable right now if Jesus Christ didn’t actually rise from the dead? The key realization was that if I’m really going to rise from the dead to eternal life because of Christ’s sacrifice for my sin, then I want to invest in that life today with everything I have.

“So I decided to make my life a little more ‘pitiable.’ I saw the opportunity to move to Albania as a chance to sell all I have and buy that field with the hidden treasure (Matthew 13:44). I realized I have a hot tip for a stock that’s going to pay dividends eternally, so I decided to, in a sense, sell my car, give up my house, cash in my liquidity and dump it all in this stock.”

Gordon said this investment might not look like a STINT for everyone. “Talking to my friends at work about Jesus is another one of those things. Considering my family, considering mentoring—as more important than if a project gets done at work—that’s one of those things that only makes sense if Jesus Christ is the Lord of my life.

“What I’ve seen in Albania is not everybody needs to do full-time, vocational ministry,” he said. “What we need is more people looking at the professional world as a ministry opportunity. Serving in Albania has not been fun all the time. Often it has been difficult, challenging and tiring. Nobody arrives in a new place, even in your home culture, and is impactful right away. It has taken great effort and patience.”

“At my going away party last September, I saw exactly how great my life was at home. I love my job; I love my friends; I love the Dallas weather—and I still do. Honestly, I like Dallas a lot more than I like Albania. What I’ve realized is that being obedient and going to Albania was about making the deliberate choice to pursue God first instead of what I think is best for me. In the end, pursuing God first is what was best for me.

“Leaving my job in Dallas and going to Albania for a year has helped me grow closer to God. I’m exercising my faith more fully, learning more about God’s character, and gaining more of an eternal perspective. I’m confident that at the end of my second stint I’m going to look back and say, ‘God did far more for me than I ever did for Him.’” — Written by Lauren Zutavern

If you are interested in exploring opportunities to serve overseas with Watermark, CRU or other ministry organizations, go to www.watermark.org/international for more information. Photo credit: Ron Acord at www.ronacord.com.