​A Response to Planned Parenthood

End of year giving is a critical time for every non-profit organization… the ones we love and support and the ones we don’t. I received a letter from Planned Parenthood, urgently imploring its recipients to act now and donate before the year is over. They claim that we are in a state of emergency for women’s health, that women will die if they don’t have access to legal abortion, and that reproductive health care is health care.

As a defender of all life, inside and outside of the womb, we are not Planned Parenthood supporters, but we aim to engage, winsomely and wisely, in the culture and communities surrounding us.

In your hearts honor Christ the Lord as holy, always being prepared to make a defense to anyone who asks you for a reason for the hope that is in you; yet do it with gentleness and respect. 1 Peter 3:15

To help us do this, here are three brief responses to Planned Parenthood’s Year End Letter and the overall messaging they would like us to absorb, repeat, and ultimately, be deceived into believing.

This is a bold, alarming claim. Are we truly in a state of emergency for women’s health? If Planned Parenthood did not exist, would women be in danger of not having access to the medical services they need? The answer is a resounding no. If Planned Parenthood disappeared tomorrow, women could receive all of their basic, preventive medical services with their primary care physicians and gynecologists, or federally qualified health-care centers or rural health clinics. According to the Charlotte Lozier Institute, there are 10,500 federally qualified health center service sites and 639 Planned Parenthood centers listed as of January 2017, yielding a ratio of 16 to one.

In 2017, Planned Parenthood served 2.4 million people while community health centers saw 27 million patients. Currently, an individual is 11x more likely to seek basic, preventative medical services outside of Planned Parenthood. We are not in a state of emergency. 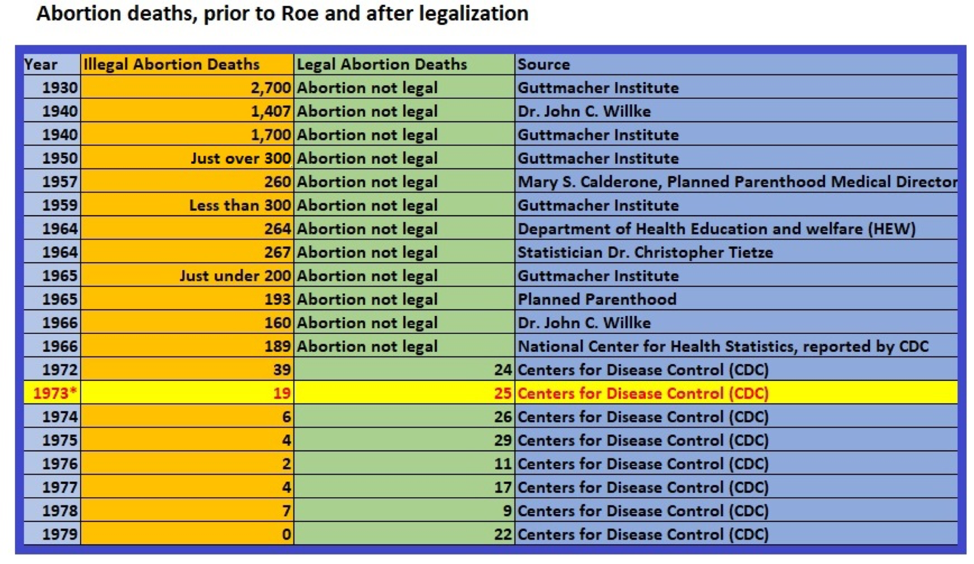 Nathanson said abortion activists sold Americans the lie that thousands of women were dying annually from back-alley abortions, when the actual figure was in the hundreds.

“Knowing that if a true poll were taken, we would be soundly defeated, we simply fabricated the results of fictional polls. We announced to the media that we had taken polls and that 60% of Americans were in favor of permissive abortion. This is the tactic of the self-fulfilling lie. Few people care to be in the minority. We aroused enough sympathy to sell our program of permissive abortion by fabricating the number of illegal abortions done annually in the U.S. The actual figure was approaching 100,000 but the figure we gave to the media repeatedly was 1,000,000. Repeating the big lie often enough convinces the public. The number of women dying from illegal abortions was around 200 – 250 annually. The figure constantly fed to the media was 10,000.”

Planned Parenthood wants you to believe that abortion is health care. They do not want the conversation to be about killing a life. Instead, they want it packaged it differently so it can be palatable to the masses.

Planned Parenthood’s former Executive Director, Dr. Leana Wen, tried to legitimize their efforts by focusing more on women’s health and preventing the need for abortion and was effectively fired for doing so. Planned Parenthood claims their business is health care so why would they fire their director for focusing on that versus abortion?

Because, ultimately, abortion is not health care. Health care seeks to heal and restore, caring for individuals and communities. It’s treating colds, setting bones, administering treatments to combat disease. Abortion takes the life of a developing human being in the womb, and leaves the mother wounded, emotionally, physically, and spiritually. Abortion harms and destroys.

What are the arguments you hear most often supporting abortion? How can we help further equip you to truthfully and winsomely respond to those arguments? To continue the conversation, join us Facebook or Instagram and email thelifeinitiative@watermark.org.